Ashley is committed to being your trusted partner and style leader for the home. This commitment has made Ashley the No. 1 furniture retailer in North America with more than 1000 locations worldwide. No matter which Ashley location you visit, you'll find stylish, quality furniture that's just right for any room in your home. That includes many of the top mattress brands—including Tempur-Pedic, Sealy, Simmons, Serta, Stearns & Foster—as well as our very own Ashley Sleep mattresses, which offer superior comfort without the premium price tag. In fact, every Ashley Sleep mattress is subject to more than 200 quality control tests—because a great mattress makes a difference to your quality of sleep and even your quality of life. Your home is more than a house. It’s the daily moments and experiences you share that make it uniquely you. At Ashley, we celebrate being home with you. Our locally owned and operated Ashley is passionate about bringing you the best value in furniture and mattresses for your home. Visit your nearest Ashley showroom today. 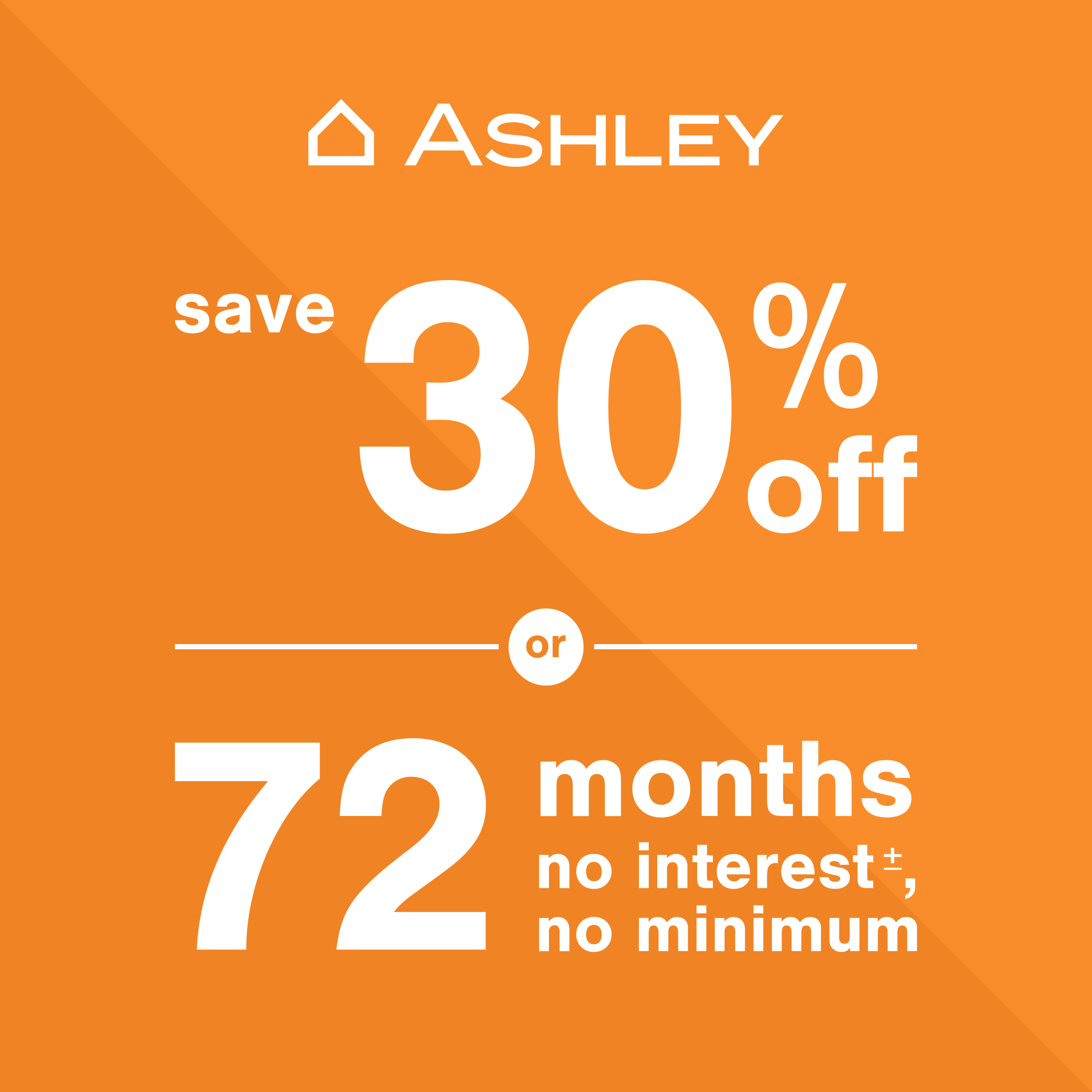 I bought my very first brand new couch in my life. The excitement was soon severe disappointment unfortunately. The ordering process went great! My associate was very pleasant, I paid cash, so easy peasy! Delivery was scheduled for the next day, also awesome. Delivery was set and I received my 3 hour time frame, which was between 2-5pm. We rushed around to run errands to get home before 2. 5:00 came and went, 6, 7 8, no 30 minute call. They showed up at around 9:00pm. Delivery guys were awesome, even though they had a VERY long day, and weren't even done with their deliveries for the evening yet. We take off the protective plastic and the couch is broken. Board in the back is nearly split in half. I put in a damage claim. They contact me to say someone will come out to fix it. I requested a replacement as I just spent almost $2000 on a brand new broken couch, but they declined and said their repair men are amazing. Repair man comes 2 weeks later. Repair man puts a scab on broken board and proceeds to leave his garbage and saw dust outside my front door. All in all the couch was very overpriced for the poor quality. The thing creaks when you sit down, it's not the same height where you attach the chaise to the couch, so the cushions don't line up right and you get a crick in you back if you lay that way. The chaise cushion doesn't stay on. I'm constantly walking by and pushing it back where it goes. Sick to my stomach disappointed. So 1 star for my in store associate, and for those poor delivery men running ragged all night.

Where do I begin…. DO NOT BUY FROM THIS FURNITURE COMPANY. YOU ARE BETTER OFF WITH RENT-A-CENTER. “Premium delivery”… Yeah right… The furniture buying process was seamless at first, Michael S. my salesman was very professional and helpful. He answered my questions thoroughly and graciously. I purchased an $1800 sectional couch. Upon delivery, I received a call from the delivery men (30 mins out) from an Opa Locka Florida number (Miami warehouse). The men were extremely unprofessional. No class or professionalism at all. I live on the fourth floor which they stated they could not fit the second piece of furniture in the elevator and that they would have to return it to the warehouse because they could only walk it up to the third-floor. I asked them to at least try to fit it in the elevator, because I get it who would want to walk up four flights of stairs with a heavy couch. THEY BOTH didn’t even ATTEMPT TO MAKE IT FIT OR MY SECOND OPTION if I gave them $60 cash under the table they could do WALK IT UP FOR ME. I was shocked and in disbelief as I had paid $180 for what they call “premium delivery.” My premium delivery service ended up being ME dragging my couch with one of my neighbors into the elevator. Which it FIT. If I would’ve known that I would’ve BEEN TREATED SO POORLY I would saved the money and paid myself for assembly and installation of the couch. Which I did. Maybe I can work for Ashley-City furniture. I NOW know exactly how to assemble and deliver sectional couches. The delivery men ended up leaving my second piece of furniture in my parking lot for me to drag to the elevator and into my apartment myself. The morality and customer decline of this company is insane, the brand image they portray to their customers in the final stages of their purchase(s) are astonishing. Nowhere in my initial buying process did I think that I would have to basically carry my couch to my apartment myself, when I paid $180 for delivery. *WARNING* Be careful when buying from this location as a majority of the furniture will come from the Miami warehouse with probably the same delivery men. They should be ashamed of the employees they hire and they should be ashamed that the employees represent this company in such a poor way. I refused to pay the $180 delivery fee which was refunded back to my card. Here are some pictures for your enjoyment.

I ordered a couch online (order # 725006969338) on 2/25/2022. I received a phone call from someone at Customer Care at Ashley on 3/8/22 to let me know that my delivery was scheduled for 3/26/2022. She said I would get a call the night before on 3/25 to let me know a more specific delivery window for that date. I also received an email confirming this scheduled delivery, and also stating that I would get a reminder email a few days prior to delivery. The week of my supposed delivery, I never got a call or email. So, on 3/25 I realized I could check my order status online through the confirmation email I received. When I clicked the link it took me to City Furniture, the place fulfilling this order, and on that site my order was listed as cancelled. I immediately got on Ashley Furniture's online chat, where a customer service agent said that they just looked up my order and it was, in fact, not cancelled, and that everything is fine and would be delivered 3/26 as promised. They also gave me the # to City Furniture and told me they were delivering. They REASSURED me that all was fine and that my couch would DEFINITELY be there 3/26 as planned. Unfortunately, they straight up lied and/or had no clue what they were talking about. I had a feeling I should call City, so I did. They let me know that Ashley had called them around mid-March to let them know to put the order on hold due to "credit card issues." They instructed me to call back Ashely and then have Ashley call them back immediately right then because, per City, Ashley's communication is sometimes not good. (Yea, seriously!). Mind you, I hadn't received ANYTHING from Ashley indicating that there had been a problem with my order and I would have literally never known if I hadn't contacted MULTIPLE customer service people at these 2 places. So, I called Ashley right after this conversation, was put on hold for a long time, and was supposed to get a call back because of the wait. When I finally got a call back, a customer service person confirmed that in fact the order was put on hold due to "a problem with my credit card" that they never specified. She kept saying the same thing without being specific and when I flat out said, "I have always had enough funds on the card," she acted surprised (as if "oh, then this shouldn't have happened"). My credit card, also my bank card, had no issues this whole time - I had been using it everywhere. No problems. Anywhere. Definitely more than enough funds on it this whole time. The customer service person said I'd have to talk to the finance department, which was already closed for the night. She also couldn't tell me any kind of time frame for the couch delivery, should the finance department fix their error the next day. She had zero information. She said she'd call me back "first thing" tomorrow morning to straighten it out. She didn't. Big surprise. I cancelled my order via phone the next day. That was the only good customer service I received from Ashley - the person who canceled my order was courteous and prompt. Otherwise, their customer service was terrible. Their online customer service chat especially was completely useless. They seemed to have no clue what was going on. I talked to at least 3 customer service agents online and they were all completely useless. I ordered a much better couch, for a much better price, from Wayfair. It came a few DAYS later. I regret not ordering elsewhere in the first place rather than waiting an entire month only to be completely disappointed and angry. I will NEVER EVER order from Ashley ever again. Or City for that matter. What an absolute waste of my time. Learn from my mistake and don't waste your time with Ashley Furniture!

Furniture is Gorgeous, our salesman Keith Trillin was fabulous. Informative but not overbearing or pressuring. Highly recommend City Furniture as well as the Ashley stores

I purchased a dual power recliner with insurance for any future repairs. Less than a year later the one side lift motor broke. I called in the insurance claim, a repairman came out, verified problem, and said he would order the part.I have heard nothing since. Since the Charlotte county store is required to order the part, I went to them four separate times and each time said they would have their parts manager look into it. I have yet to hear anything from them. Their insurance is worthless and their customer service stinks! Will never again deal with this company.

Nice store with a great selection. Walked around for almost an hour and no one offered to help. That's unfortunate. My husband and I specifically set out to visit there after researching online sectionals at various furniture stores. Ashley made our top three.