PLEASE BE AWARE SHIPPING TIMES ARE LONGER THAN NORMAL. WE ASSURE YOU WE'LL GET YOUR ORDER OUT AS SOON AS POSSIBLE.  HERE'S WHY
Your Closest Homestore
Delco Plz, Winchester
0

schedule a private in-store appointment
COVID-19: A NOTE TO OUR CUSTOMERS
LEARN MORE
IN-STOCK & READY TO SHIP UP TO 50% OFF*!
SHOP NOW
EXTRA 10% OFF* WITH CODE: CYBERDEALS
SHOP NOW
CYBER DEAL SOFAS $299
SHOP NOW
ATTN: Some stores are opening as regulations allow. Find your store below for more information. Read more. Every precaution is still being taken to ensure a safe, stress-free shopping experience. See here. 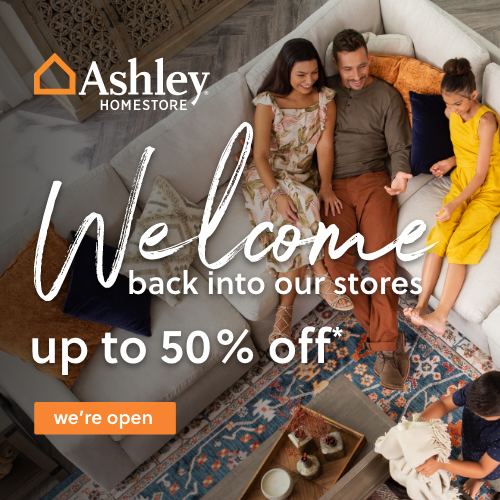 i purchased a table console on august 29 2020 at huntington branch, i paid delivery as well, until now my order has been pushed back, they said dec 3, then i called and now reschedule again to dec 18,2020, been reschedule multiple times i keep calling customer service asking for cause of delay but i was just advised to call the sale person very frustrated

Purchased a sofa table and end table. End table arrived damaged so i worked with Customer Service to arrange a replacement. The replacement also arrived damaged.. At this point we decided to buy elsewhere and requested a return and refund of the damaged item. Was told they dont do returns... Poor customer service, they have now lost me as a customer over $200 they refuse to refund.

I came in after seeing something online. My sales agent Hakeem matched the online price. She was very helpful.

Needed a larger dining room set. Researched and found what I wanted but walked around the store to check out other options. I actually found a set that I really liked! Trouble is, I waited over 15 minutes for a sales person to acknowledge that I existed. Time is money... Done. It’s doubtful I’ll ever return. And to be fair, they may not have had enough sales staff on duty I don’t know. A simple, “I’ll be with you as soon as I finish with this customer” would’ve been ok.

Over priced furniture, even when allegedly 1/2 price.

I would never recommend Ashley Home Store to anyone as I believe it is engaged in deceptive sales practices. Ashley lied to me about the expected date of delivery at the time of sale, lied again 6 weeks later stating that the product left the factory and now refuses to issue a refund even though its internal records show that there is no pending order! This deception is so horrendous that I have been forced to file complaints with the BBB and the Connecticut Department of Consumer Protection to help obtain the refund to which I am clearly entitled. By way of background, I placed an order for a loveseat on September 9, 2020. I was told by salesperson Carl Lyon, prior to placing the order that, due to COVID, there would be a four-week delay in delivery, and that the tentative date for delivery would be October 9, 2020. I was later told that the tentative date of October 9, 2020 needed to be changed to a confirmed delivery date of October 24, 2020. The reason it is clear that October 24, 2020 date was a confirmed date (and not a tentative date) is that (i) Ashley never sought to revise the delivery date and (ii) because (according to Ashley), it had left the factory. When I called the store on October 25, 2020 to ask about the loveseat, I was told to call back on October 27, 2020. On October 27, 2020, I was told that the loveseat had been on a truck but that the truck was involved in a motor vehicle accident on its way to a “warehouse.” I then spoke with an Ashley manager, Clint Taylor, and requested that Ashley provide a tracking number so I could verify what I was told. Ashley refused that request, stating that only store employees could track the shipping status and verify that the loveseat had left the factory. After I pressed Ashley on this issue, it admitted it had lied! Specifically, Ashley acknowledged that no loveseat ever left the factory. Adding to Ashley’s deception concerning the “truck story”, Ashley now confirms that I have no pending order! Since there is no pending order for a loveseat, I am undisputedly entitled to a return of my $1,031.57. Ashley cannot legally keep money for non-existent orders, yet it continues to refuse to issue a refund. Simply put, Ashley took my order based on false pretenses: that the expected delivery delay would be only four weeks. It then sought to deliberately mislead me concerning the delivery status by falsely telling me that the loveseat had left the factory. Thereafter, it confirmed—in writing—that there is no pending order. Yet, despite this serious deception and no pending order, Ashley is refusing to issue a refund. This is reprehensible.

This has been a nightmare. I purchased a bed set. The delivery date would have bern great, if the delivered the right parts. And if it the foot board wasn't broken. They reordered and redelivered the exact same WRONG parts a week later. Then they couldn't resolve it over the phone. Had to drive 30 min to the store only to be told we can reorder and deliver again in two weeks. No one there has any empowerment to make any decisions. One department doesn't talk to the next. They say empty sorrys and empty promises. No true empathy. No restitution. Just "sorry. Not my department". And that's is the short version. I will NEVER buy from this company again. I will stick with RCWilley. I still only have parts of a bed and sleeping on a matress on the floor.

This has been one of the more frustrating purchases. We bought four rooms of furniture so spent a lot of money here. Pros: Sales staff, we worked with Richard who was helpful and knew his supply. When I had my first delivery issue and was told I needed to go to the local store to as for compensation, I spoke to Pat who was also helpful and gave us $150 back (which in the end, was not enough). The actual men who delivered were nice and quick. Cons: We had our delivery scheduled for a Monday. Had multiple calls confirming the date/time, etc. I got a voicemail after the confirmation saying our mattress was delayed a couple days but that everything else would be delivered Monday and to call if I had questions. I didnt call because the voicemail was clear as day. Monday came and went, and they never delivered. My husband took the day off from work to be home, we sent our two dogs to a daycare for the day so they would be out of the house, cleared rooms for the delivery, etc. After three calls to dispatch, and two were i was disconnected after being on hold over 10 minutes, they told me we were rescheduled for Friday and someone called and talked to me which was a blatant lie. After arguing, i was rescheduled to Wednesday and needed to take another day off, and get my dogs out of the house. Tuesday I get the confirmation call, i was told everything (including our mattress) was on the truck. Wednesday comes, the delivery takes place (the actual men who delivered and set up were very nice), but no mattress. So i had to call again and get that delivered in another week. Mind you, we already removed our old mattress so have nothing to sleep on for a week. and then there is a scuff on the footboard so they have to send someone out to replace that. And then our office desk was missing a screw and they couldnt send someone out for over a week to put that together. For one freaking screw... I do not recommend their delivery group. I dont know if it is third party or what, but they have been so horrible to work with that I do not want to do business with them again. UPDATE: we had someone come out to fix the desk - they couldnt do it and said they needed more parts and we will get a call to schedule yet another visit. It has been a week and no call. I have been on hold all day and cannot get through. I tried their chat option on their website and no response there either. Very disappointed in this process. I will need to go to the store today, yet again, to see if they can fix this directly.

Sells rep was great! But the manager sucked! She refused my offer on clearance furniture. Pretty sure she just was racisit. She wouldn't even look me in the face.

The purchase of my new living room was very good the rep was attentive and courteous and the price was great. One bad thing is your customer service phone service I was kept 20 minutes on hold thecwas asked to leave a message. Maybe I suggest that you recruit more employees.

A good place to go for furniture

I went in person to Ashely Furniture and expressed needing bar stools within a month. The sales rep related that it could be done. She even went so far as to say it would likely be less than a month. After a month passed I received no email or text (they related that they have no way of reaching out to customers, even though they have a cell phone and email given with the paperwork). I called into ashley furniture and was on the phone for an hour and a half. I related to the women on the phone that I felt like I was lied to in the store so that I would make the purchase. She related that she understood and was sorry but there was nothing that they could, or would do. I am to the point that I will no longer use ashely in the future. If you plan on using them you should come with the expectation that the date of arrival on furniture will be much later (typically) than what they will tell you in the store. You should also not expect any fix if you are a dissatisfied costumer.

I give them four stars because their customer service could use some work and their products could use some slight design improvements (the leg cross members could be closer to the leg [and/or reinforced with metal braces so the cross member doesn't crack if tightened too tightly and so it can hold the legs more securely). But all in all: WAY BETTER THAN RCWILLEY!